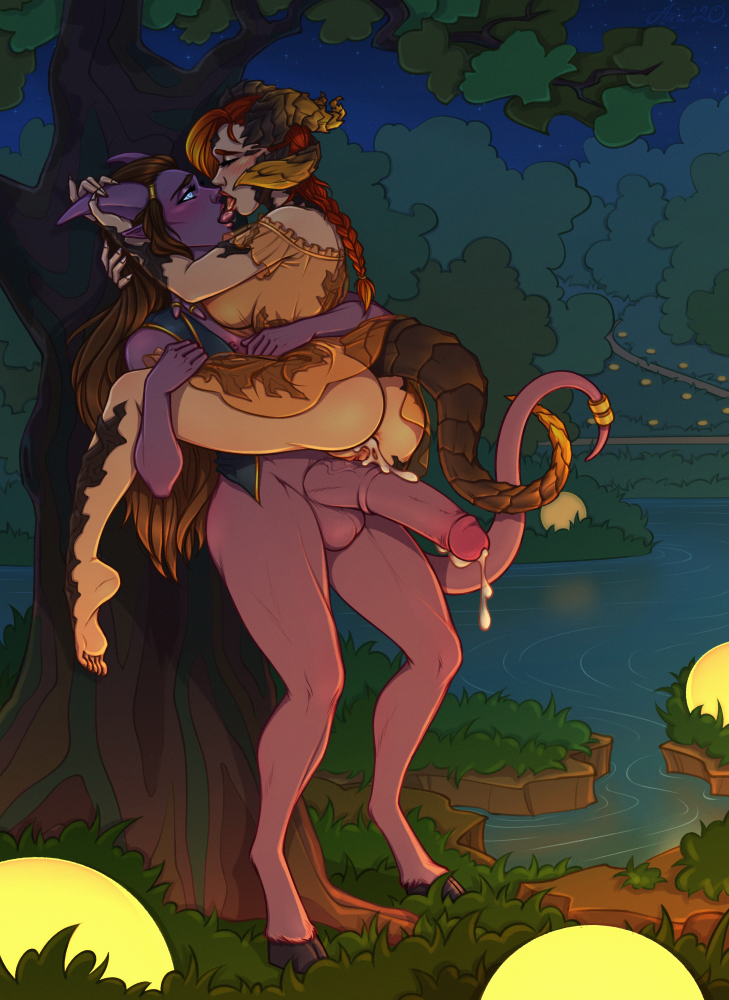 Commission for  and (on twitter) of their beautiful OCs Veladre and Miri :)

Hello Kate,
first of all, I gotta say I love this illustration, as well as your art in general. The soft warm lighting on the skin in particular is amazing and really makes the characters come to life.
Secondly, being a trans female myself, I want to thank you for tagging this as lesbian. One of the ways many people show disapproval for trans women is by mislabeling our relationships (with men as gay, with women as straight). Futa are seen as a fictional, somewhat idealized, version of real world trans women, so it makes me happy to see this labelled correctly.
Much love and appreciation

thank you so much for your kind words! I had to take down the yuri tag unfortunately, since hf guidelines state that futa/girl is not yuri. I wish it wasn't the case, cuz that heavily implies that futa can't be female, but I have to stick to the rules :(

I understand, but the initial decision on your part is still appreciated.

I see they went for a hybrid, hyper dick on him :P (Find it a bit amusing how draenei anatomy is never consistent between the genitalia xP)
Background looks really nice.

Btw, futa on female is not lesbian. It's just female+TG. The shoujo-ai rating is for girl on girl. (Since you can't tag female twice. And yes, this means a tg+tg rating is technically lacking)

huh! thank you. I just consider futa a girl, so I didn't even think about it.

Don't be so fast to thank them; they're wrong on pretty much every point.

I mean, there is a point about tags in the FAQ :)

Yeah, and while I can appreciate not wanting to see things that they don't like, but they're making no effort to hide the fact that it goes beyond a simple preference into outright bigotry.

It's coo. It's like... the #1 people tag wrong on this site. And admins are too lazy to deal with it anymore xP
Thanks for being chill about it btw.

I think we had this discussion a looooooong time ago in this site, and seems you forgot the consequenses to it. You seem to have a lot of time in your hands again, which seems fairly good, if it was for something constructive.
I won't say this again, if I see you again, harassing artists, you will have consequences. HF is not meant for people coming here to stalk and mess with people, it's about community. Integrate to the community.

Behave, don't answer to this post as there won't be any more feedback, just behave.

yeeeeah I can see the logic :) also, futa with a man would be pretty nice, if you ask me... but that double standart thinking always gets on my nerves as well >:C

Yeah, they're pretty rare tbh. I've seen a few though.
But yeah... it's just a really stupid double standard+contradiction. Since: If they now claim the futa is female... but they can't have sex with males because "that would be gay"... that implies the futa are male. As, otherwise it'd just be straight sex. It's just very "They are trying to have their cake and eat it too" kinda thing.

I've dabbled in the 18+ community for far too long though xP
I've noticed through surveys and observation, that in rough terms: 9/10 futa are "male". Their sole purpose is to be "the dude" so that males have something to project onto or identify as. Just with "nicer curves", while still using nicknames like "Big Daddy". And also ironically: So guys can talk about how much they want to suck dick. (but it's okay, because they use female pronouns for the penis) I've even seen close to a majority of said futa fans, also consider the vulva to be "gross and icky". So... I honestly don't know where to place that sub-fandom. As they feel like a weird mix of closeted homosexuals, except they freak out over both gay and lesbian porn.

lmao people are just weird xD to be fair, I never really came across people with such a strong opinions on that topic. In my experience they just like futa and don't think much of it :)

Mate, unless the artist/owner specifies otherwise.
Futas are females.

Nope. They're futa.
Unless the owner/artist can prove otherwise.
Especially since generally: You can replace a futa with a male, and nothing about the picture changes. You replace the futa with a female, and the entire picture collapses.

Don't misgender other people's characters it's not cool.
Futas are female.

Yep, futas are females or males depending on the artist's choice. This is fantasy, not real life, if a futa is replaced by a man in the picture that makes a hell of a difference. Point of futa is to have girl on girl plus dick fun without the need of an actual man.

Yeah... they start coming out of the woodworks if the boat is rocked xD
Like: If you'd do a futa with a more prominent pussy than dick. And/Or a futa that prefers to use their pussy instead of their penis. Then they come charging with claims that that's crimes against humanity or it not being a "real" futa xD

Congrats on the feature, you earned it!

Really beautiful and hot, I love it.

how are you so good at this...

Could definitely use a TG tag!

damn you'r right! I totally missed it, thank you.