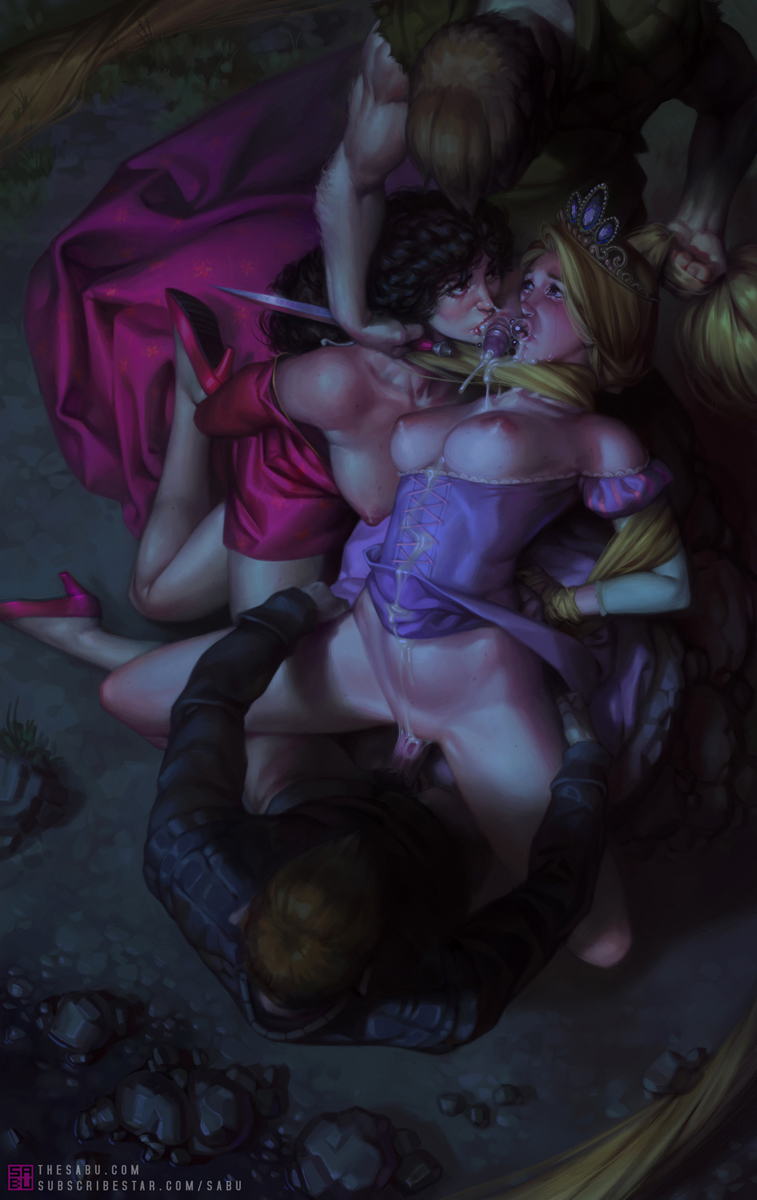 
This pic was actually very interesting when it comes to the creative process in itself, so far I’m pretty happy with the first and second part of my process (Sketch and Color/Values), however the third part (Rendering) still needs quite some work, I’ve actually had to scrap almost two days work because things just wasn’t looking right, and to be honest I’m still not 100% happy with how the pic turned out in the end, the style looks too much like my previous work , than my last pic .

What I’m trying to achieve is something in between these two styles, with the level of details of Rapunzel’s pic, but with the proportions/dynamism and personality of the Zelda pic. I’ve got a bit more of work to get my art-style where I want, but I think I’m on the right track ^^

Oh! as for the pic itself, the scene happens around the end of the movie *spoilers* I felt like the scene when Mother Gothel “rescue” Rapunzel from the Stablington Brothers was a nice fit for a BE, instead of being putting to sleep, the brothers manage to subdue Gothel and.. well, you can see what in the pic xD

Hope you guys like the pic!
Cheers my friends!

*This illustration is a work of fiction and in no way intended to promote violence.

Rapunzel deserve of of you bonus/sketch pics

Working with a lot more of that lighting. I love this concept, with hair as bondage of course, but in a more subtle way than going full shibari or something. The moonlighting on their skin is absolutely exquisite.


I'll just show myself out

Having the villain and heroine together like this is absolutely perfect. Rapunzel has always been one of my favorite Disney crushes, so her in one of yours is a dream come true. Absolutely fantastic work!

Thanks my friend! and yeah, these type of pairing is not very common, might do it again at some point ^^

Seeing the heroine and villianess victimized together is pretty hot. Hope to see that more in future drawings. Also between this and the jinx drawing I think your stuff is giving me a taste for hair bondage.

Thanks man! and yeah, its not the kind of pairing you see all the time, gonna prob do it again at some point ^^

I’ve always like heroines in bondage, sometimes by the villain, but putting them together like this, I agree, is fenominal and extremely hot

I never considered this combination before but agreed, it's pretty novel.

Always do what mother ask

That's what happens when you let your hair down for the wrong man.

In Sabu's world, not even villains are spared.

Mother Gothel is one of my all-time favorites, and I love the idea of the two of them sucking dick together. I like how what we can see of Gothel indicates that she's a little older than Rapunzel, with more prominent lines around her collarbone and bigger, less-perky breasts. My only critique would be that this pic, and a lot of the recent ones, have been SO DARK that to me they obscure a lot of the detail, which is kind of the fun of it.