Want to voice your opinion on which series or image should continue or have more done with it? Then give it here - //maximum-context.ru/xbnat/pictures/user/Dboy/708248/Top-series-to-continue-2-graph
in the comment section. Voting will last until the patreon starts ( a long while from now )or the instant one hits the top of the favorite section. Vote and or favorite the series image that you want to see continued.

(10/16/2018)Prepping for a patreon page
//maximum-context.ru/xbnat/pictures/user/Dboy/644646/Possible-Patreon-Outline

Please (if I said no to your original request) do not keep throwing requests at me one after the other until something sticks.

Topics to not hold your breath on though are as such

Don't care for these topics and will never want or be ok with doing them.

Here's the middle ground Stuff that I don't care for but don't have a problem with doing it if commissioned, ((I'm done with my commissions for now, I will tell people when I start up again in my gallery, keep an eye out for it if you're interested in asking for a commission.)).

So there you have it, what I will, Maybe, and won't do ever.

So please if you have a request or you're looking through my gallery and want to wonder why I'm doing what I'm doing, please keep this in mind.

And if you don't like what subject matter I'm doing that's fine, and if you do that's great, enjoy.

Are you still drawing? I really love what you do, I imagine i'd become jaded with it after 1404 drawings and animations also personal life, other interests, more important and meaningful things get in the way but what you do is always really creative and unique, my personal favourite is the Magic user's club animation, so amazing and intense! I'd love to see a sequel to it someday, I imagine with Ranfan from DBZ or even multiple girls!... but that's just me.
Anyway keep doing what you're doing (if you feel like it) because it's good stuff! You're my favourite femdom artist, used to be howlsfm but he quit, Masahira on ecchi iwara is another great one right now.

I'm not going to be doing commissions for a long while.

Request are different, Though I still probably wont do any right now, that doesn't stop me from placing another into the pile should one interest me enough for later.

Hi dude how are you? We are missing your amazing art, are you going to continue drawing soon?

Yes I will continue but regrettably I do not have as much free time on my hands as I use to.

Well there is Pixiv, Although It's really just an extra account at this point. In case I need it. But I'm going to try and keep everything here on HF only from now on.

I'm not taking on Commissions at this moment. I will be doing so when ever I get a patreon going. But that wont be for a while.

Gonna slip in a request for more Timesplitters. That SLUT shirt does things to me.

Thanks for the reminder. I still have this one to animate.
//maximum-context.ru/xbnat/pictures/user/Dboy/315706/Time-to-Split-her-1

Not now, I will see about doing commissions through Patreon though when I eventually launch it.

For the most part I'm going to try and keep everything here on HF. Though if needed there is always Pixiv, though I prefer to limit where I place things.

I'm not sure what person would not want Tsunade to suck and kiss them off, but maybe Naruto wouldn't want that considering he knows her better than others and why he wouldn't.

Oh and another side note (last one I swear), if you've never checked out RedMoa's kissjob animations, please do if you have the time. Could be nice cocktease inspiration. Anyway, love the latest content! As an animator it's crazy how often you pump these out, good work.

Don't let the upload rate fool you, A lot of these have been built up over time, I was going to save these for when the Patreon would have started but as it is right now I don't think I will have the time to fully invest in it for a while and I didn't want to hold onto these and make people wait even longer for it. I want to make sure that when I do start the patreon, that I will be ready for it.

I see, that makes much more sense. That sounds exciting! Looking forward to whenever you manage to get the Patreon sorted out.

Lol, fair game. I understand wanting to keep your limits, keep up the good work!

I was looking through your pictures and read about your interest in having a video game developed. If you don't mind, I would like to share my ideas/capabilities with game development as a programmer by communicating with email or message. You can let me know anything by replying to this comment on your own page (I will check for it) OR by leaving a comment on my page. Hope to hear from you.
2ZXeGames

As of now, I'm just trying to figure out what I'm capable of doing on my own first. From what I can see right now it's going to be a matter of just finding the right scripts for what I would like done most likely. If for some reason I find a road block in this process early on, then I will be sure to seek out help from programmers such as yourself to take up the task for me. Thanks for reaching out. I will keep a note of you down the road if needed in the future.

I gave it a skim through, and well there's silly and then there's really silly. I mean, jumping vagina attacks? They don't even wrap their legs around their heads, they just jump attack with their vaginas, legs spread out... Like their vagina is a foot... The look and style, I'm just not feeling it. Sorry.
Go to page: 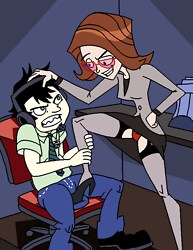 Dan VS The Boss 2 Animation