Like what you see? Here's other places where you can find me:
| | |

Hey, you shouldn't use pixiv, they are censoring your art there. Presumably because it is a japanese website and they have laws requiring censorship in japan.

I do censoring myself - it is required by their rules.
Why wouldn't I use Pixiv though - it's pretty great. And there is plenty of other places we it's possible to find my drawing without censorship if need be.

note, its easy to miss, but what they are doing is lightly pixilating the genitals

I absolutely love your work that's uploaded to . Will your Supergirl be making an appearance there?

This is the first time I hear about this site.
So, someone else uploading my drawings there.

Okay. Cool. There's a Harley Quinn comic, a Pharah one, a Batgirl one, and a Powergirl one. They're all really good.

Hey,
Any idea when you are planning to start accepting new commissions? :)
Also wanted to ask whether you have your works uploaded somewhere as higher resolution than on maximum-context.ru for example?

Hi.
No idea when I'll be open again at this moment. Not this summer for sure.

I upload all drawing on with the highest resolution: / /> There's also

For when they do open up again, where are your rates posted?

Here should be the same prices -

Do you have any update for when you'll be finished with Shadow of Anubis Part 3?

Maybe end of the year.

Good day to You, dear DevilHS!
I'm a very big fan of Your works, and I must say that You're an AMAZING artist. So talented and imaginitive.
Will we see more of Lara Croft? It would be so awesome!
Speaking of her... I wanted to share an idea/fantasy of crossover that maybe You'll find interesting as well...
It's Lara Croft having her tight, juicy PUSSY ramed hard by Spyro the dragon (a bit older, of course).
It's a crossover that has NEVER been done before and I doubt If anyone even imagined it.
Think about it: two BIGGEST stars of PSX/PS2 era having HOT & GOOD time together...
Don't You think it's nice, tempting and very original?
I can imagine that in Your style it would be a pure gold!

BTW, that darn Tumblr made a nasty number on You as well?
Damn it! That Tumblr REALLY has turned into a bucket of crap. What is going on?
I heard many awesome artists are having problems becouse of Tumblr over some time now...

Thank you.
I'm sure I'll draw Lara Croft again. Can't promise that Spyro will be involved though.

Hi, I'm a huge fan of yours. Did you ever consider making a VN / game ? It would be glorious with such a talent.

I had plans for a game but not enough free time right now to work on it.

Absolutely love your work, the new comic is just amazing! <3

Hi! I can't seem to find all of your pics on any platform you are on nowadays (HF, twitter, pixiv, FB, newgrounds). I think large portion of your works were only on tumblr. Could you tell me if it's possible to find (all) your old works somewhere, and if not could you upload them somewhere?

Hello.
HF has all my the finished big illustrations from the past years. Some of the sketches are lost on Tumblr, true.
I have a big archive on of everything that I could find that I made in the last three years (including comics). So, it could be the thing you want.
Go to page: 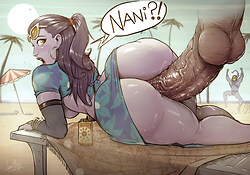