Our own video game () is happening!  Thanks to our Patreon supporters, we've started working on our biggest project yet - a full-fledged RPG with (mostly) crossdressers as the protagonists and enemies featuring futa, femboys, monsters, futa monsters, dudes, and sliiiiiiimes.  You can download the public build , but if you want the latest builds as we work on it, you can subscribe to our Patreon - and while you're at it, you can vote on what content and features make it into the game.

While we're working on the game, we're also  You can see us Saturday, Monday, and Wednesday or Thursday, usually in the afternoons (EST) but sometimes all day or in the mornings on Saturday.
Thanks to everyone that's supporting our !

We've started , so if you need up to the minute Majalis updates, well, that's strange, but now you can get them!

AND we're also starting to put together a website of our very own.   :D  We've got the domain and hosting, and it's currently in the works, so stay tuned.

Go ahead and email us for whatever. We're also available on g-talk or chat.  Commissions are frozen for now, but if you want to hash out an idea, don't let that stop you.

And the usual spiel for newcomers:

If you're wondering, we're a two person cylopean nightm-- team, one artist (female, Alis) and one writer (male, Maj). The artist tends to go by the Majalis moniker and the writer is known only by his shadowy *mumble mumble*. Both of us enjoy creating smut for other people to enjoy, and between the two of us, we touch a lot of bases. Sexy bases.

Oh, and just in case it wasn't clear from our profile pic, the artist is female, the writer is male (combined, we apparently form "other"). Some people keep referring to "his" art, so, head's up! Gender confusion is a part of what we do.

I really wish you would open commissions.

Raquel is on hiatus? Will we see some new pictures or chapters?

Hey guys. I really like the idea and art behind ToA but not that crazy about the actual gameplay itself, it is just not my kind of game. I am wondering if you would be willing to at some point release all of the art and more importantly for me all of the writing for the game separately.
It doesn't even have to be formated to be user friendly as far as I am concerned, a raw dump of text would be fine. I hope this is something you consider since I and others would surely enjoy it. It has been a while since our MajAlis thirst was quenched :P
Thanks either way and you are both still awesome ;)

We're adding a scene viewer into the game that will let you choose your path through a given encounter - a raw dump of text and images would be fairly useless since the encounters are so branching.

I was afraid of that, oh well. Will the scene viewer be open right away or will the encounters have to be unlocked via playing the game?

Waiting for New stories best author on the foundry by a long shot.

You can send us an email at , or message us on Patreon.

I see the artist is doing awesome, but is the writer okay? I've fell in love with a lot of the old stories, and I know the game must take a lot, but I'm always disappointed when I see no new additions to stories. Is there gonna be any or is the game just taking that much or what? I don't mean to be rude, and I apologize if this comes across as so

Cool! Again, sorry if I came off as rude. I look forward to whatever shiny new stories you make. Those ones are always the best.

Had never thought of myself as a fan of trap stuff, but goddamn those asses you're drawing!

Your work is showing up on bdsmlr now that tumblr is dead.

i will point out that that story IS on HF already

Not that one, there are several stories that are tumblr only.

🎉🎉🎉🎉🎊🎊🎊🎊 for my favorite artist, I want to thank you  for all your work of this year, i want to wish for this new year a lot of inspirations, super good things, and that you keep doing that fantastic work of yours , because you are awesome, nothing more to say than HAPPY NEW YEAR AND VIRTUAL HUGS🎊🎊🎊🎊🎉🎉🎉🎉
Go to page: 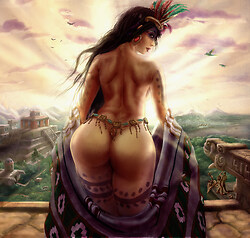 The Sun and the Moon (Mayan Priestess)