love your style! amazing stuff! if you would be interested in doing a commission let me know! gkfulghum(at)gmail(dot)com

I read that you are making a game, is it true? If so, can I do some illustration to show you?
(sorry my bad englis)

I heard you had a great Korrasami comic you'd stopped updating, but I can't find it here.

Keep up the good work.

Hm, have to say. You got an overall really interesting style.
That said though, you severely have to learn how to draw females. Like, looked through most of the comics and whatnot of what you're selling, and most of the anatomy in those were outright pathetic compared to the male one. I mean, the highest detail picture in that Vinyl trash was the one offshot R63 picture in there. And if the obligatory genderswap pic in a supposed lesbian comic has by far the most impressive detail in it... you kinda fail at lesbian content... and yes, I know you primarily do straight+cock worship. But that just makes it even more deadpan when you toss out something haphazard solely due to the fact you couldn't get a dick in there. I know you only stick to tropes and stereotypes. Which kinda raises the question of "Why even?" Is it to fill some quota or something? I'm honestly curious. Is it just obligatory pandering? :P


I mean, I've seen your older stuff too. You kinda seem to have went "meh, cba" and stopped practicing female anatomy ages ago. While you've practice and learned dozens of penis techniques and varieties. You're still kinda stuck at the ½ human vulva you sorta know how to almost draw. And yes, I know it's common for many high tier artist to be shoddy, to outright incompetent at female anatomy. (I mean heck, most of the popular artists are xP)  But I just find it odd to why exactly you don't want to improve is... or is the rumors true that you're just to lazy to cba, as what you got atm sells just fine, and it means you don't have to put any more effort into your work? Which, if that's the case, I could see why. Even if I wouldn't agree with it. I mean, outside of a token minority; Who willingly works more for the same amount? :P

>.> so you know when you offer constructive criticism you usually clean it up a bit
and don't turn it into a forum for you to just trash on some body inflicting your own selfish opinions.

That being said, Its okay to not like some one's style. If you feel you have a suggestion
to improve it, voice it in the proper constructive method. Artists appreciate that.

But If you don't like their style and have pretty much nothing good to say about it and
no ways to help them improve what you believed to be crap, then news flash dumb ass.
THE INTERNET AND ITS CONTENT ARE YOUR CHOICE TO VIEW. IF YOU DON'T WANT TO SEE
IT, STOP LOOKING. Only a pompous ass makes them selves suffer threw something that they
can only view by seeking it out and then complains about it.

...again just case you ARE actually stupid, you dont have to look at doxy's art if you don't like it.
Also... just a little fyi... putting a :P after a whiny bitchfest doesn't make it suddenly cute and cheeky.

I generally try to have it somewhat cleaned up. In this case it was a bit of a "eh..." and I spent less time on refining it due to the artists prior shown selfish arrogance+incompetence.
As, all other times I've seen them get critique, they reply to it like if it was their mom telling them to clean their room for the 19'th time in a row, while they yet hadn't bothered to do shit since the last 18 times. So it was more that it felt like a waste of time to sugar coat it. As they would probably not bother to step up their game anyhow. So I aimed somewhere in the middle. I don't baby them, nor bludgeon them across the head with it. More like a deadpan slap :P

And like hinted above: What you are saying here is incorrect. Artists don't appreciate that. SOME artists do. That is a very massive difference. If would be really nice if it was true. But it only applies to some artists. There's tons of them that demand exclusively positive comments and/or praise, calling anyone that even ex: Point out that a vagina isn't located on the stomach a "hater". Or how someone has to send them a mail first, asking for permission to give them critique/feedback. I did give them proper constructive critique around a year or two ago on several rookie mistakes they were doing. (most of which they still do today.) And their overall reply was kinda along the classic "Yeah... but my fans are too stupid to notice/have a standard. And me fixing that would mean that I have to bother/put effort into it, so..." excuse. So they saw no real reason to why they should try to improve if already can manage to sell what they currently do.

As for that: Most I critique admits that they are incompetent at x, or can't draw y for shit. But like said above: they still manage to pawn it. And thus, see no reason why they shold get better. As that means they have to inch away from the "maximum income, minimum effort" that a surprisingly large amount of people go by. As for the whole "suffer through" part. That's also bogus on some levels. Do you have any idea how shit people are at tagging in general? I know from surveying ~20 pages of "lesbian" on the site E621, Derpibooru and R34. Around 30-60 % of it was actually lesbian. The rest was either straight, "bi" or sometimes even gay. There's plenty people that literally think that just because something has two chicks in it, it automatically qualifies as "lesbian", even if all said girls do is suck a guys dick together. (or that genderswaps still count because "well... they were ORIGINALLY a girl so...") So, around 95 % of what I complain about, I don't "seek out". It's either hurled at my face through frontpages, incorrectly placed. Or turns out to be traps. Plus, people regularly drop by and send me "half-assed shovelware" for me to tear apart critic style. Or, the people that make said haphazard content come by and tell me that "no-one cares about that. So STOP DOING IT WRONG!" which is a funny statement, as if no-one cares about it, why would it have to be done "right" by their preconceived notions? If they truly didn't care. They wouldn't be tossing fits, and demanding that everyone falls in line and does it"how it should be" ;3

Actually, I often question how stupid the average porn viewer must be most the time. Considering I've on several occasions exposed a scam, and the general reaction turned out along the lines of "Aw man... now I'm going to feel like shit for purchasing this tomorrow, along with regret the commission I am getting from them next week!" Like, who the fuck still purchases stuff they found out is a sham? And I know. I just want to convey that I'm not "super serial". And most other smileys are already taken by the professional trolls+haters. So there's kinda only ":P" left to use for "get your shit togheter" factual feedback xP

I can say, traps can be a really neat/fun thing. But they can also be a lazy cop-out.
Which tends to be what people like Doxy use it as. They're too lazy to put effort into their work/learn how to draw females. Yet can't release something due to lack of content. So they just slap a dick on it and call it a day.
Traps can be done well. But a "I know I used guys with tits the last 92 times, but trust me, THIS time, it's totes girls, honest!" approach to it is well... more than just a little underwhelming+repetitive.

Wouldn't be so bad if they, and other's didn't come up with such shitty excuses to why they are inept at female anatomy xP Or made sure to emphasize how they TOTALLY can actually draw it super well. They just uh... can never actually show it, because reasons~

Get a girlfriend and stop drawing shitty art

Ive been a fan of yours for some time, but, I only literally just found your Clean Color Fill tutorial - THANK YOU SO FUCKING MUCH. I cant stress how much I hate doing the base flats, theyve been the worst, longest part of a pic for so many years and now I can just get them over with (although, I did have to adapt the technique because I use Photoshop and not Sai, but thats easy)
Ill be off now, just wanted to say thanks for improving my life as an artist <3
Go to page: 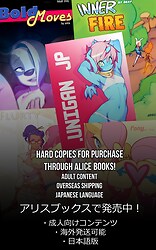